Why do some plastic bags called PVC bags? 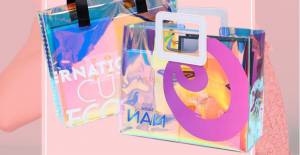 PVC is polyvinyl chloride. PVC plastic bags are plastic bags made of polyvinyl chloride plastics. In the process of PVC processing, plasticizers, anti-aging agents, colorants, etc. are added to a series of compounds. These toxic or even carcinogenic additives will be released during the use and placement of PVC plastic bags. come out. Therefore, according to national regulations, PVC plastic bags cannot be used as food containers or food packaging materials. Part of the plastic bags on the market is PVC plastic bags.
The full name of PVC is Polyvinylchlorid, the main component is polyvinyl chloride, and other components are added to enhance its heat resistance, toughness, ductility, etc. It is a kind of synthetic material that is well-loved, popular and widely used in the world today. Its global usage ranks second among various synthetic materials. According to statistics, in 1995 alone, the annual output of PVC in Europe was about 5 million tons, while its consumption was 5.3 million tons. In Germany, the production and consumption of PVC is an average of 1.4 million tons. PVC is being produced and applied worldwide at a growth rate of 4%. In recent years, the growth of PVC in Southeast Asia has been particularly significant, thanks to the urgent need for infrastructure construction in Southeast Asian countries. Among the materials that can produce three-dimensional surface films, PVC is the most suitable material.
PVC can be divided into soft PVC and hard PVC. Among them, hard PVC accounts for about 2/3 of the market, and soft PVC accounts for 1/3. Soft PVC is generally used for floors, ceilings and the surface of leather, but because soft PVC contains softener (this is also the difference between soft PVC and hard PVC), it is easy to become brittle and difficult to store, so its scope of use is limited. Rigid PVC does not contain softeners, so it has good flexibility, easy forming, not brittle, non-toxic and pollution-free, and has a long storage time, so it has great development and application value. Hereinafter all referred to as PVC. The essence of PVC is a kind of vacuum blister film, which is used for the surface packaging of various panels, so it is also called decorative film and adhesive film, which is used in building materials, packaging, medicine and many other industries. Among them, the building materials industry accounts for the largest proportion at 60%, followed by the packaging industry, and there are several other small-scale applications.
PVC is a polyvinyl chloride plastic with bright color, corrosion resistance, strong durability. Due to the addition of some toxic auxiliary materials such as plasticizers and anti-aging agents in the manufacturing process, its products generally do not store food and medicine.
PVC is actually a vinyl polymer.
Simply put, an aqueous solution of salt chemically decomposes under the action of electric current. This process produces chlorine, caustic soda and hydrogen. Refining and cracking petroleum or gasoline can produce ethylene. When chlorine and ethylene are mixed, ethylene dichloride will be produced; ethylene dichloride can be converted to produce chlorinated vinyl, which is the basic component of polyvinyl chloride. The polymerization process connects chlorinated vinyl molecules together to form a polyvinyl chloride chain. The polyvinyl chloride produced in this way is in the form of a white powder. It cannot be used alone, but it can be mixed with other ingredients to produce many products.
Chlorinated vinyl was first synthesized in the Justus von Liebig laboratory in 1835. The polyvinyl chloride was synthesized by Baumann in 1872. However, it was not until the 1920s that the first commercial product of PVC was produced in the United States, and large-scale production began in Europe within the next 20 years.
Polyvinyl chloride has the outstanding characteristics of abundant raw materials (oil, limestone, coke, salt and natural gas), mature manufacturing technology, low price, and wide range of uses. It has become the second largest general-purpose resin in the world after polyethylene resin, accounting for 29% of the world’s total synthetic resin consumption. Polyvinyl chloride is easy to process and can be processed by molding, laminating, injection molding, extrusion, calendering, blow molding, etc. Polyvinyl chloride is mainly used to produce soft plastic products such as artificial leather, films, and wire sheaths, as well as hard plastic products such as plates, doors and windows, pipes and valves.
Polyvinyl chloride is flame retardant (flame retardant value above 40), high chemical resistance (resistant to concentrated hydrochloric acid, 90% sulfuric acid, 60% nitric acid and 20% sodium hydroxide), mechanical strength And the advantages of good electrical insulation. But its heat resistance is poor, with a softening point of 80°C, it starts to decompose and change color at 130°C, and precipitate HCI.